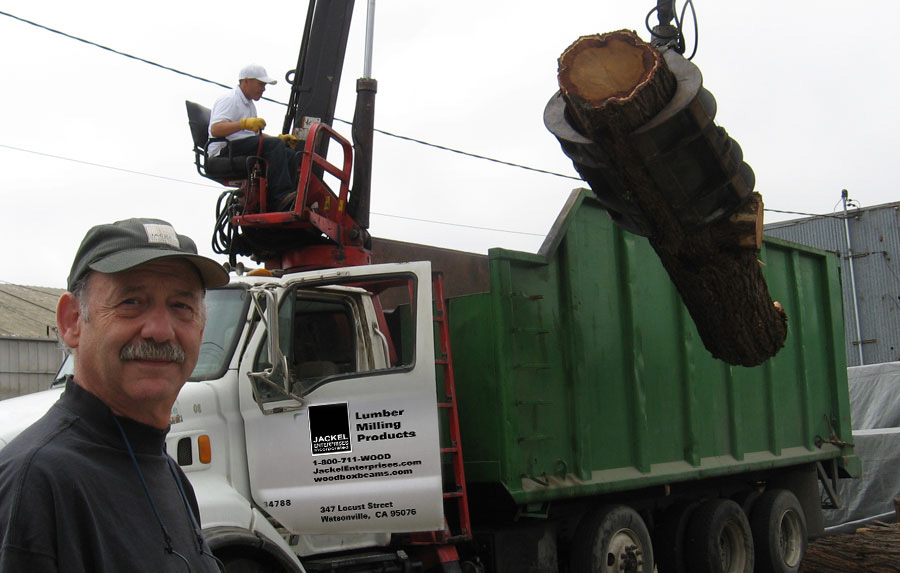 Steve Jackel moseys about the premises of Jackel Enterprises, occasionally interrupting his monologue to point out an irregular slab of Monterey cypress—wood with umber lines that swirl into a speckling of eyes—or a bisected redwood log with burnt bark, evidence of the fire it didn’t survive. Jackel acquired these pieces of lumber because his business involves “urban, suburban and rural forestry.”

He salvages trees that would probably otherwise be taken to the landfill after falling on a road during a storm or being cut down to make room for new landscaping. Jackel explains that salvaging these trees is good for both the landowner and the environment because it halts some carbon emissions. If Jackel doesn’t buy the tree, the owner has to “take it to the landfill. And he has to pay the landfill. So it’s a double negative—it’s money out of his pocket and the carbon gets released.” Jackel has been involved in processing salvaged woods since 1974, when he met a park ranger at Henry Cowell State Park trying to get rid of a walnut tree.

Even though at the time he was working at a lumberyard, Jackel marvels that he was “24 years old and hadn’t made the connection between lumber and a tree.” He says he got it the moment they cracked the walnut tree open and he saw the beauty of what was inside. Jackel is teaming up with the Museum of Art and History to help more people internalize the connection between trees and wood this Saturday with a guided tour through his Watsonville mill, woodshop and lumberyard.

“None of these woods are what I would call popular in the scheme of markets,” Jackel says, but some of the local woodworking artists currently featured at MAH in an exhibit called “Studio Made: Santa Cruz Woodworkers” still covet them. It’s the “defects and character” within salvaged woods, as Jackel calls it, that appeal to these artisans. Matthew Werner, who makes handcrafted furniture using marquetry (a technique of creating a decorative veneer), says, “I’m always looking for unique woods—anything a little different from what’s on the racks at the lumber store.”
Redwood logs with a burnt live trim salvaged from the 2009 Big Sur Fire.
Patrick Stafford, another local woodworking artist and teacher at Cabrillo College, says he uses salvaged woods whenever possible for environmental reasons.

“There’s less and less wood available. I feel like people are wasting wood in huge amounts,” he says. Stafford also says the quality of traditionally harvested lumber has diminished over the last 30 years due to efforts to keep up with the increasing demand for it.

“The quality of the wood is not as good as it once was because they are growing the trees too fast,” he explains.

In addition to showing off the lumber itself, Jackel will explain different parts of the “low-tech science” involved in preparing salvaged woods for use, such as the kiln that balances the wood’s moisture content with the ambient air. He will also discuss the differences between types of woods and certification processes on the upcoming tour.